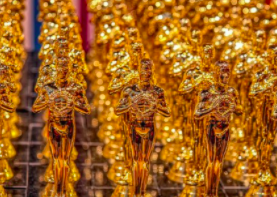 Considering that many movie theaters have been closed for over a year, it has been difficult to see new films. However, the Oscars were still held to honor those in the film industry. There were a total of 115 nominees ranging from 23 different categories,  spanning from Best Visual Effects, Best Original Screenplay, to Best Makeup and Hairstyling. The 93rd Academy Awards ceremony was held in two different locations in Los Angeles, CA, the Dolby Theater and the Union Station.

The ceremony is typically held in February but it was pushed back by two months due to the pandemic. The awards honored movies released in 2020 as well as the first few months of 2021. The nominees for the Oscars were announced on March 15, 2021, by Nick Jonas and his wife Priyanka Chopra.

The film “Nomadland” won the most Oscars throughout the night, taking home awards for Directing, Actress in a Leading Role and Best Picture. Director Chloé Zhao was the first woman of color and the first Chinese woman to receive this award.  This year’s Oscars were much more diversified as more women were nominated and took home awards than ever before. Frances McDormand, Yuh-jung Youn, Mia Neal and Jamika Wilson were just some who were nominated and won an award.

All of the speeches were heartfelt, and the audience, both in person and at home, could feel the emotion and gratitude of those who took home an award. Along with recognizing women, Best Live Action Short Film Oscar winner Travon Free spoke about the deaths of unarmed Black people at the hands of the police in the United States. Hearing his speech resonated with me because I thought it was important that these events were talked about in this type of setting, with millions of Americans watching at home. Police brutality shouldn’t just be talked about when someone gets killed. It should be talked about all the time so we as a country can come together to create change. Acknowledging these two topics is key to showing that a difference can be made.

“Police brutality shouldn’t just be talked about when someone gets killed. It should be talked about all the time so we as a country can come together to create change.””

It was increasingly common this year to hear and talk about police brutality in the United States. For this topic to be spoken about so publicly is crucial in making sure that we continue to raise awareness surrounding the deaths of Black people in our country. It is not a matter to be taken lightly but sure is something that deserves a platform to be talked about so that everyone can be properly informed and educated. Through the many female winners this year, it is also beyond important to show that women play a major role in the film industry and should be recognized for their work. As many of these women broke the glass ceiling, only a brighter future can stand ahead of us.

On another note, the red carpet definitely did not disappoint, despite the pandemic and smaller audience. Color schemes of attire ranged from gold, to red, to flattering black dresses and tuxedos. Some outfits even coordinated with each other, like Martin Desmond Rae and Travon Free, who wore pins with the numbers two and 24 as a tribute to Kobe Bryant.

I love seeing what everyone wears to these ceremonies and which designer made the outfits and accessories. There is so much personality in how someone dresses and I definitely saw that by seeing all the different types of outfits worn by the nominees and their guests.

Overall, the 93rd annual Oscars did not fail to honor those who continued to work and produce movies throughout these hard times. This year’s Oscars will be one to remember, as it spotlighted many women in the industry, and it acknowledged the current racial justice movement.