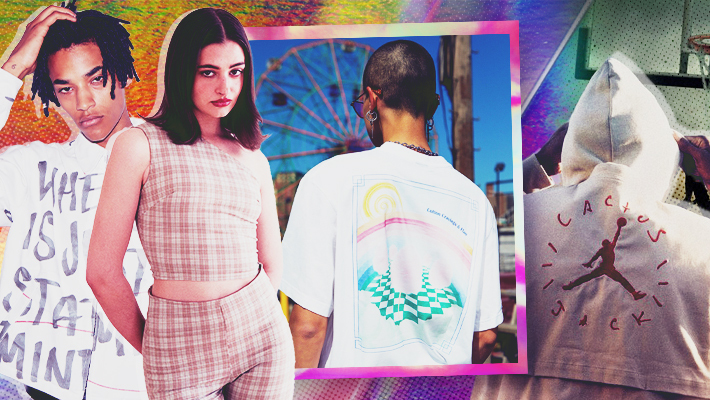 Welcome to our weekly roundup of the best streetwear and fashion trend drops on the market! This week we’ve got the exclusive details on New York-based streetwear label (and favorite of Bella Hadid and Marshmello) FLAN’s unconventional capsule with Atlanta-based Cotton Cravings, as well as new spring/summer sets from Peachy Den, Travis Scott’s big Nike collabo, new weirdness from Supreme, and Mr. Saturday’s best drop to date.

Besides those top-line drops, it’s a lean week this go around. But things are sure to heat up in the following weeks as we officially dip into the summer season. This year, we might actually get to wear shorts outside instead of in our houses, binge-watching Netflix and trying to convince ourselves that Tiger King isn’t boring! Imagine that!

If you’re looking for some kicks to complete your look, be sure to hit up our weekly sneaker roundup, SNX DLX, which features more Travis Scott, and the week’s best Jordans. Jordan and Nike heads are living their best lives right now with all the fire drops out of the big Swoosh, but we’re dying to see what the other big labels have in store. Not calling out any names but… get on it Adidas.

While streetwear food collaborations tend to be nothing more than gimmicky cash-grabs, New York-based streetwear label FLAN is attempting to disrupt that trend with their playful late-spring-early-summer capsule collection made in collaboration with Cotton Cravings. Linking up with a Georgia-based organic cotton candy brand might seem like a weird move for an emerging streetwear outfit, but FLAN is all about being playful — the brand’s name is an acronym for Forever Laughing At Nothing — so this seemingly random light-hearted linkup makes sense.

The unisex capsule collection is on the smaller side, featuring only a t-shirt, socks, and flan-flavored cotton candy (because what good is collaborating with a cotton candy brand if you’re not going to make some snacks?). The collection’s centerpiece, the t-shirt, features a pastel graphic of cotton candy, watercolor rainbows, and dual branding and is made using 100% organic cotton t-shirts, in keeping with the ethos of both brands.

It’s lighthearted, fun, and simple — the way streetwear should be — which is probably why the brand has caught the eyes of the Hadid sisters, Noah Centineo, and the Art Basel crowd.

The FLAN x Cotton Cravings collection is available now at the FLAN Labs webstore. Yes, the cotton candy is there too.

You’re probably well aware that Travis Scott and Nike linked up this week for yet another fire Jordan collaboration, but the insane hype behind that shoe drowned out the news that the sneaker is being released alongside a matching apparel collection that consists of a variety of branded apparel and weird accessories. The collection features a pronounced motocross vibe, mixed with Scott’s usual faded desert aesthetic and includes work jackets, rugby shirts, t-shirts, hoodies, pants, and safari hats.

On the accessories end, we have backpacks, fanny packs, bucket hats, socks, bracelets, phone cases, and a welcome mat which I’m POSITIVE nobody asked for. Insane hype aside, we’re not going to lie, the collection is pretty dope. Hit Travis Scott’s website to pre-order the merch, which is set to ship in about two months.

The collection leans most heavily into its influences with Madonna tabloid and Michael Stewart tribute hoodies. Stewart, a model and promising graffiti artist, was murdered by New York City police following injuries he received during his arrest for using a soft tip marker on a New York Subway city wall. Stewart has since become an icon of New York City culture, inspiring Jean-Michael Basquiat’s Death of Michael Stewart (Defacement) and one of the most pivotal scenes in Spike Lee’s Do The Right Thing.

Michael Stewart isn’t just an icon of New York City, he’s an icon of the street culture that would inspire streetwear, so it’s cool to see Mr. Saturday label head Joey Gollish pay tribute in his own way.