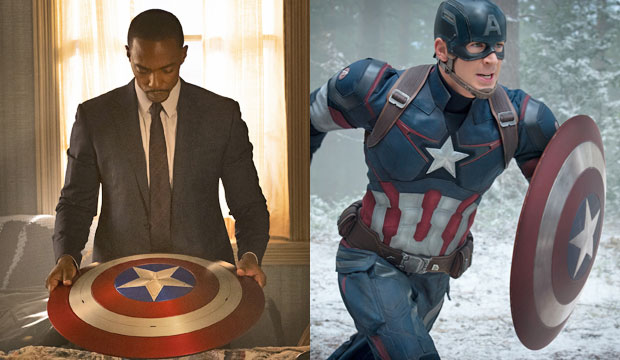 Anthony Mackie went into the Disney+ series “The Falcon and the Winter Soldier” as the Falcon, but he eventually took on the name and shield of Captain America. Now he’s up for Best Hero at the fan-voted MTV Movie and TV Awards. But the previous Captain America, Chris Evans, was nominated twice in that category and never won it.

Steve Rogers was the original hero who wielded the shield. Evans first played him in “Captain America: The First Avenger” (2011) and reprised the role in multiple Marvel Cinematic Universe films until “Avengers: Endgame” (2019), when (spoiler alert for this two-year-old movie) Steve decided to travel back in time and live out his days with Peggy Carter (Hayley Atwell). At the end of “Endgame” he appears in the present day as an old man who passes the shield on to his friend Sam Wilson (Mackie), who is reluctant to take it.

Evans earned six MTV nominations for playing Captain America over the years, winning once: Best Fight for “The Avengers” (2013) alongside Robert Downey Jr., Mark Ruffalo, Chris Hemsworth, Scarlett Johansson, and Jeremy Renner in their battle against Tom Hiddleston as Loki. His Best Hero noms came in 2012 for the first “Captain America” (he lost to Daniel Radcliffe for the final “Harry Potter” film) and in 2016 for “Avengers: Age of Ultron” (he lost to Jennifer Lawrence for the final “Hunger Games” movie).

Now Mackie is nominated, and it could be a close race. According to the combined predictions of Gold Derby users thus far, the front-runner is Pedro Pascal as the title character in another Disney+ series, “The Mandalorian,” But Mackie isn’t far behind, ranked second with 13/2 odds. He’s predicted to win by one of our Top 24 Users who got the highest scores predicting the last MTV Movie and TV Awards, and by four of our All-Star Top 24 who had the best predictions when you combine results from the last two MTV Awards ceremonies. If they’re right, the shield won’t be Mackie’s only symbol of heroism: he’ll have the golden popcorn too.

PREDICTthe MTV Movie and TV Awards now; change them until winners are announced

Make your predictions at Gold Derby now. Download our free and easy app for Apple/iPhone devices or Android (Google Play) to compete against legions of other fans plus our experts and editors for best prediction accuracy scores. See our latest prediction champs. Can you top our esteemed leaderboards next? Always remember to keep your predictions updated because they impact our latest racetrack odds, which terrify Hollywood chiefs and stars. Don’t miss the fun. Speak up and share your huffy opinions in our famous forums where 5,000 showbiz leaders lurk every day to track latest awards buzz. Everybody wants to know: What do you think? Who do you predict and why?