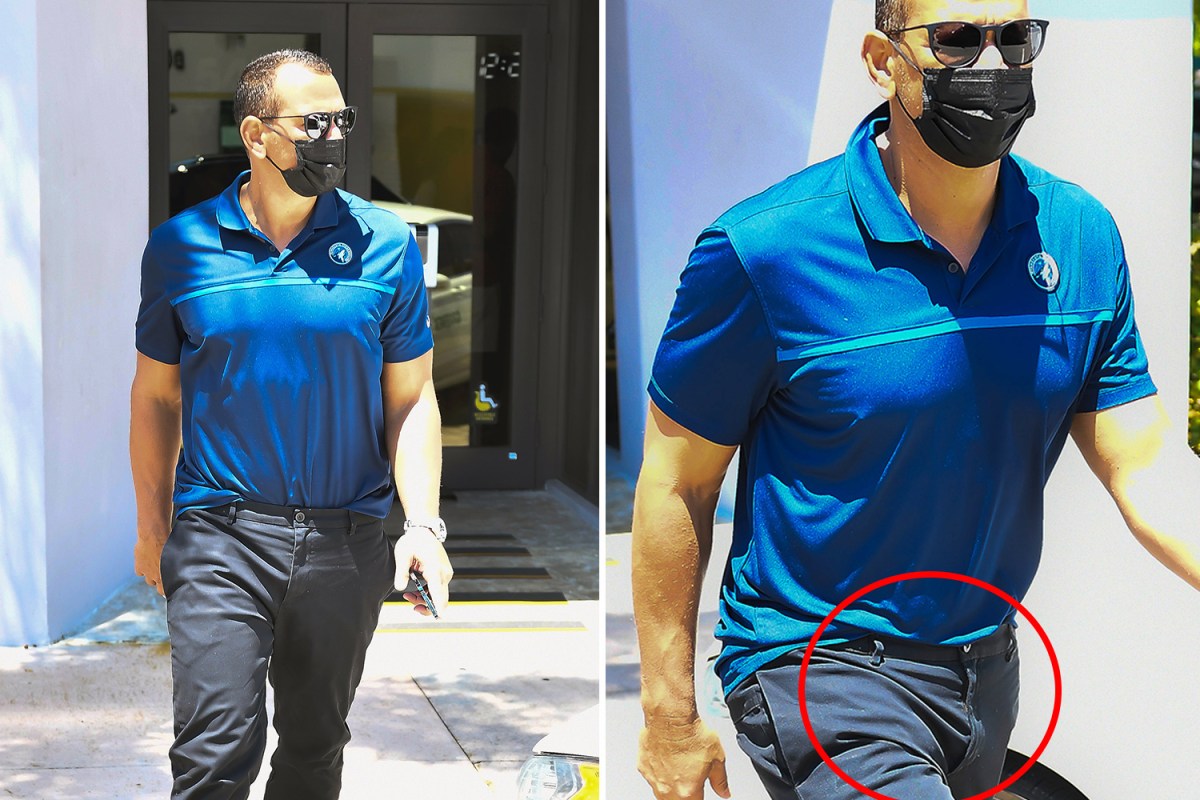 ALEX Rodriguez showed off his bulge AGAIN while leaving a gym in Miami to work on his “dad bod.”

The 45-year-old was seen leaving the Miami gym in a blue polo shirt, while his bulge was on full display in a pair of gray pants.

Alex tied the look together with blue sneakers, a black face mask, dark sunglasses and a silver watch.

The former New York Yankees player appeared serious as he left the gym, which may be due to that fact that his former fiancé was spotted spending time with her ex Ben.

Ben and Jennifer, collectively known as Bennifer, got engaged in November 2002.

The pair ended up delaying their 2003 wedding before they officially split in 2004.

The exes have been spending time at her Los Angeles home, while Ben‘s been seen going there during the day multiple times recently.

A source told Page Six: “Security picks him up at a nearby location and drops him off after spending a few hours at her house.”

JLo allegedly sends a white Escalade SUV to pick him up and take Ben, 48, to her residence.

Back in April, the 51-year-old actress and Alex announced their split with a joint statement after four years together.

They said: “We have realized we are better as friends and look forward to remaining so.

“We will continue to work together and support each other on our shared businesses and projects.

“We wish the best for each other and one another’s children.

“Out of respect for them, the only other comment we have to say is thank you to everyone who has sent kind words and support.”

JLo shares twins Max and Emme, 13 while ex Marc Anthony, while ARod has daughters Ella and Natasha with Cynthia Scurtis.

A source close to the multi-talented performer previously told Us Weekly that she’s looking for a partner she can trust.

Additionally, Jennifer didn’t fully “trust” A-Rod even before rumors began to swirl that he had cheated on her with Southern Charm’s Madison LeCroy.

“She has been pretty miserable,” said another source, adding “and didn’t think it was in her best interests to stay with Alex.”

Back in April, the former athlete showed off his bulge in tight sweatpants while flaunting his “dad bod” on Instagram.

Alex shared the photos with his 4m Instagram followers with a caption explaining he had been sticking to his diet and fitness plan, adding that he was pleased with the results.

One of the photos, which taken in December 2020, showed ARod wearing white trainers and smart sweat pants, with a jumper and jacket in the same creamy colour.

While he said he wanted to show the difference in his overall body, thirsty fans couldn’t take their eyes off his very impressive bulge.

One fan wrote in the comments section: “Oh lord! She kept the package.”