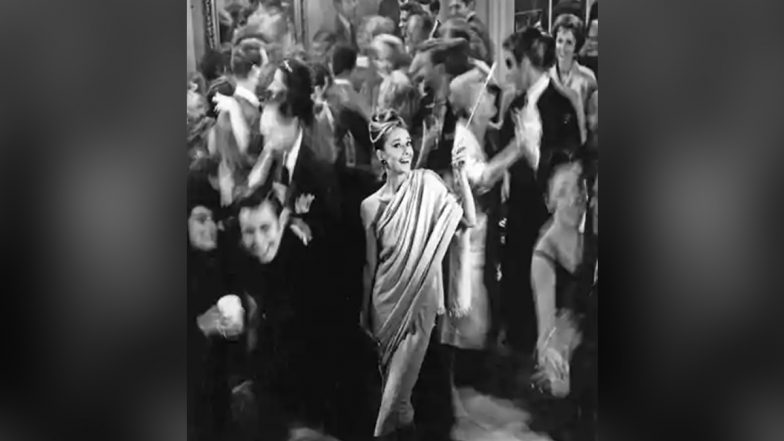 Audrey Hepburn was one of the most inspiring actors of World cinema. Many actresses model themselves like her even today. Today, her fashion choices in movies are a genre in itself. That took us to one of the iconic movies of Hepburn, Breakfast At Tiffany’s. Did you know the actress wore a saree in the film? Well almost. In one of the party sequences, in the film, Hepburn can be seen wearing yeards of clothes draped around herself in the style of a sari. If a story in Livemint is to be believed, that was a bedsheet to create a sari silhouette. Audrey Hepburn Birth Anniversary: These Timeless Wardrobe Essentials for the Breakfast at Tiffany’s Chic Girl Approved Vibe!

Audrey Hepburn Birth Anniversary: Did The Late Actress Drape A Bedsheet To Resemble A Saree For Breakfast At Tiffany’s? (Watch Video)

The costume designer for Hepburn in the film was none other than Hubert de Givenchy. There’s Hepburn wearing the draped bedsheet looking billion dollars. She accessorised with a huge stone stud and a high bun. In one of the scenes, the shot is taken from an elevation where the lady stands out in the outfit. We are in love with her, the scene and that bedsheet. Audrey Hepburn Quotes to Celebrate Hollywood Legend and Fashion Icon’s 90th Birth Anniversary

Hepburn’s sartorial choices had always been elegant, classy and comfortable. Her expressive face, those big round eyes and acting finesse had captivated many.