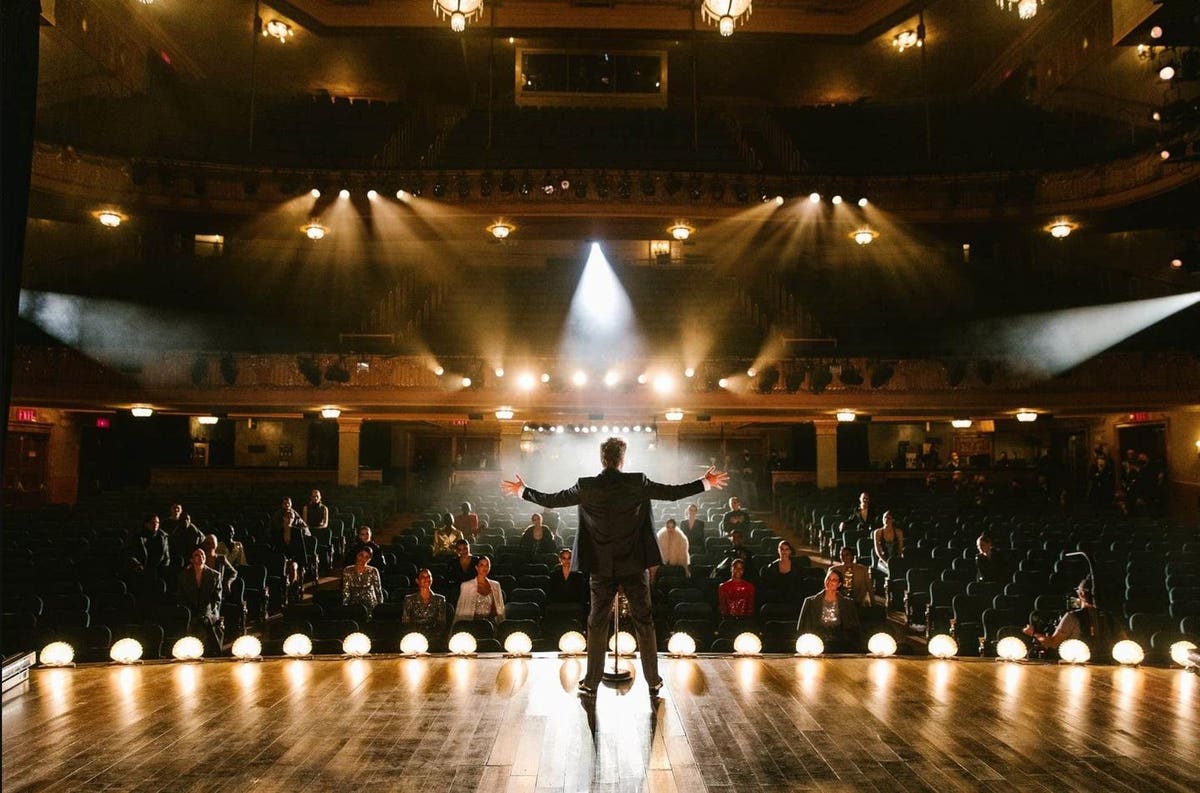 Those who follow fashion know Michael Kors, is the ultimate New York showman who loves Manhattan, especially the theatre. To mark the 40th Anniversary of his namesake brand, MichaelKors Collection, the designer staged and filmed a star-studded runway show in the heart of Midtown’s theatre district in the name of great clothes while supporting the struggling acting community, especially devastated by the pandemic. Kors announced prior he was making a personal donation to The Actor’s Fund, so the event served as both collection reveal and fundraiser.

Kors opened the online experience with a live taping from Times Square, expressing not only his affection for New York and Broadway but with an urgent message regarding the plight of out-of-work actors due to shuttered theatres. “I must have seen over 1,000 Broadway shows, it’s just pure magic. I’m still filled with joy and anticipation just talking about them,” said Kors of the donation, “but now I want to give back to the group of people on Broadway who have given me so much.”

A charming short film followed by actor/director/producer Erich Bergen, “Michael Kors, Lights Up Broadway” inside Sardi’s, the theatre-district dining classic famous for its wall of stars still closed due to the pandemic. Caricatures cleverly morphed into real actors on a Zoom call like one big reunion slash mutual admiration society meeting. Billy Porter, Bette Midler, Debra Messing, Alan Cumming, Bernadette Peters, Chita Riviera, Matt Bomer, Marisa Tomei, Jane Krakowski, MJ Rodriquez, Ashley Park, Sara Bareilles and Cynthia Nixon, among others playfully bantered back and forth while relaying the serious business of Broadway shows. Facts such as the two billion dollars in ticket sales sold in its last season open and how during the 2018-2019 season Broadway supported 100,000 local jobs contributing close to fifteen billion dollars to New York City’s economy, and how The Actor’s Fund also cares for those behind the scenes whose job is to make the Broadway shows come to life. Kors made a plea to all theatre lovers to join him in donating to the relief fund.

Thus with New York just starting to shake off the devastation of both lives lost, an exodus and an economic whammy, the collection shown was a nod to opening night in a larger sense, with every stylish New Yorker getting ready to hit the town once more. “Whether you’re goingto the office, having a casual dinner in the neighborhood, or are in fact ready to go to a party again, this collection is all about making every moment a special occasion and feeling confident, glamorous and upbeat. There’s a sense of timelessness and big city optimism that has been a linchpin of Michael Kors since the very beginning—a yin-and-yang balance between opulence and simplicity, something that’s laid-back and at thesame time luxurious,” Kors said in a statement describing the joy of dressing.

His model line-up was as star-filled as the Sardi’s wall; Shalom Harlow, Carolyn Murphy, Bella Hadid, Liya Kebede, Karen Elson, Alek Wek, Ashley Graham and Helena Christiensen strutted out of the legendary eatery down the middle of 44thStreet cued by show producer Alexandre de Betak who directed this portion of the filming. Literally stepping out on the town, the runway eventually made its way to the Shubert Theatre, where composer, songwriter and singer Rufus Wainwright was belting out a medley of upbeat New York Broadway-themed songs; namely “City Lights”, “New York State of Mind” and “There’s No Business like Show Business.”

The clothing was a Kors fashion line-up of greatest hits on par with the A-listers, supermodels and iconic music by Wainwright.  Those staple hits include camel cashmere, gray flannel, houndstooth check, leopard prints, pinstripes, windowpane checks, monochromatic red, cream and mono-pattern ensembles. And lots of sequins. Proposed for daytime on a shift dress, on an oversized black satin puffer and most demonstrative at night worn with faux fur, signaling a return to over-the-top 1970s glamour New York City had lost on an average night on the town even before the pandemic struck.

It was all executed in the designer high-low approach whose clothes exude glamour in the most simple silhouettes; a T-shirt in cashmere; a fur-lined topcoat; a thigh-hi slit on a simple pencil skirt. Like many in fashion, Kors appears to be hoping for a post-pandemic 1920s-esque mood that still delivers the ease of the past year’s pandemic comfy clothes. But in case anyone feels like dressing, he proposed plenty of tailoring perfect for the business of piecing a shattered Big Apple back together and better than ever.