Pandemic movies are likely to be at the bottom of most viewers’ must-see lists right now, but the bizarre new comedy Apples offers a fresh take, peeling away the horror to reveal an absurdist core. Christos Nikou’s film, executive-produced by Cate Blanchett, is set in a modern Greek city rendered weirdly docile by mass amnesia. A busker picks his way falteringly through Twinkle, Twinkle, Little Star, foxed by a tune he can’t quite recall, while a man arrives at the last stop on a bus journey with no idea who he is or where he is going. Though there is no apparent cure, sufferers are prescribed everyday activities to help rebuild their lives, from swimming and dancing to one-night stands. With no modern technology in this timeless alternative present, each task must be documented with a Polaroid camera. Pics or it didn’t happen.

“This is how people behave today,” says the 37-year-old director, speaking by video call from his home in Athens. “We photograph something, then put it on Instagram with a Polaroid filter. We care more about the photo than the actual moment.” Despite his use of the first-person plural, Nikou claims not to go in for selfies. “Never, never, never in my life!” He joined Facebook briefly to help spread the word about Apples. “I hated using it. The only good thing about the pandemic might be that we are so overwhelmed by screens that we will say: ‘OK, enough.’”

The movie is more than a critique of a desensitised world. It is concerned most of all with the perils of forgetting, whether on a personal or cultural level. The idea was inspired by the death of Nikou’s father. “That loss ended up feeding into the script. How you can accept something that hurts you deeply and still move on in an optimistic way, by keeping the other person alive in your memory.”

Remembering is hard, he points out, when we have technology to lean on. “We don’t need to know the way because Google Maps tells us. And how many phone numbers do we know? For me, it used to be 15. Now it’s one or two. We must make sure we don’t forget our emotions and become like robots.” It isn’t only individuals whose memories are enfeebled; it can happen to entire countries, too. “I hope after four years, you will not vote for Boris Johnson just because of the vaccine,” he tells me, his wry smile not quite dulling the note of admonishment.

What is his own country prone to forget? “Greece isn’t learning from the past,” he says. “We don’t fight for culture any more because we believe we have it already. We think we are the most cultural society in the world.” During the Grexit crisis, he kept hearing people invoking Greek culture. “They would say: ‘Why are they doing this to Greece? Greece was the beginning of civilisation. We have the Acropolis!’ What does that mean? The Acropolis doesn’t belong to me. I didn’t build it. It’s very close to my house, but it’s not mine.”

One thing Nikou seems less than thrilled to be reminded of is the Greek weird wave of offbeat, disturbing black comedies. The most successful titles, such as Dogtooth, Alps and The Lobster, were collaborations between the director Yorgos Lanthimos and the writer Efthymis Filippou. It’s not that he doesn’t admire them – “They totally created their own style,” he says – he just doesn’t think Apples has much in common with those movies.

Yet his star, the bearded and wonderfully blank-faced Aris Servetalis, is best known from Alps, while Nikou also shares Lanthimos’s preference for deadpan tableaux, affectless performances and stoned comic timing. He even got his own break in the industry at the age of 24 as assistant director and script supervisor on Dogtooth. Whichever way you slice it, Apples hasn’t fallen far from that tree. When I mention the weird wave, though, he crinkles his nose in disapproval, as if he has been asked to compare apples and oranges, or Apples and Alps.

“We tried to do something more emotional than those films,” he insists. And it’s true that the eerie comic chill of his picture’s first half does thaw gradually, leaving a tenderness more reminiscent of The Truman Show, the movie that made him decide to become a director. That emotional undercurrent is what Blanchett found so refreshing about Apples. “She said it sounded conceptual, but that it’s actually very warm,” he says.

The actor saw Nikou’s movie at the Venice film festival last year, then invited him to breakfast at her hotel the following morning before signing on as executive producer. (It didn’t hurt that they are both represented by the Creative Artists Agency.) She will also produce his next project, Fingernails, co-written with the British playwright Sam Steiner, and featuring Carey Mulligan as a woman living in a world robbed of romance.

Nikou gets so gooey-eyed when he discusses Blanchett (“She doesn’t behave like a star, she’s like a normal human!”) that I wonder whether he broke his no-selfies rule during that first meeting. “Um, we took Polaroids,” he admits. “One for her, one for me.” It’s a sweet image: the fledgling director and the Oscar-winning veteran whipping out a camera and saying “cheese”. Or maybe it was “apples”. 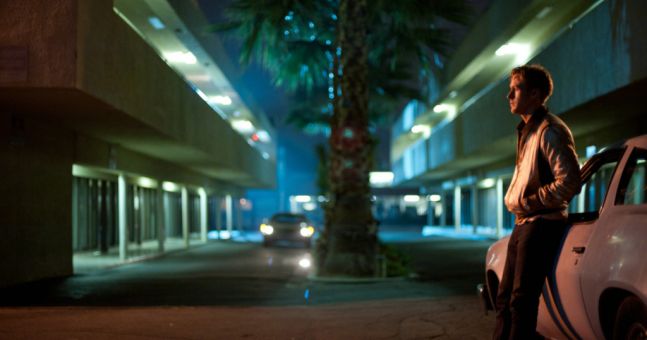