American supermodel Gigi Hadid, on Friday, took to her social media handle and shared, presumably, a throwback picture to give a peek into the “backstage craze” before gracing a ramp. Interestingly, the picture also featured Gigi’s sister Bella Hadid, who can be seen helping a model style her hair. Meanwhile, Gigi can be seen beaming from ear to ear, presumably, wearing her earring in the candid photo. Instagramming the photo, Hadid exclaimed, “over a year without backstage craze”, in the caption.

Within a couple of hours, the American supermodel’s post managed to garner more than 2M double-taps and is still counting. A section of verified Instagram account and pals of the supermodel registered their response in the comments section. A makeup artist wrote, “Awwww Miss it” while director Loic Prigent exclaimed, “Love this picture”. On the other hand, a verified handle by the name of Paul Hanlon commented, “That was at Moschino together and your sister starting doing hair with the team”.

Another comment read, “I like Bella is helping out on hair”. Meanwhile, Bella and Gigi’s mother Yolanda Hadid also showered love on her girls. One-word compliments, such as “queen” and “beauty”, among many others, along with heart-eyes emojis were a common sight in the comments box.

Interestingly, the 25-year-old model returned to the runway on March 5, five months after giving birth to her daughter Khai. She graced the catwalk at Versace’s Milan Fashion Week autumn/winter 2021 collection along with her sister Bella Hadid. Sharing a post for the same she surprised fans with her return. Gigi Hadid’s Instagram caption was “Opening & closing @versace is always an honour and was the best come’back.”. She had also spoken about her time away from her work and her excitement at being back as she added, “Mostly just lucky to be healthy, working, and in a safe/tested environment to hug so many I’ve missed like family this past year”.

Gigi, who is currently in a relationship with English singer Zayn Malik since late 2015, gave birth to their daughter Khai in September 2020. She had confirmed her pregnancy during an interview on The Tonight Show Starring Jimmy Fallon after rumours began to circulate around her pregnancy. She has shared a couple of pictures of her newborn. However, none of Gigi Hadid’s photos reveals her baby’s face. 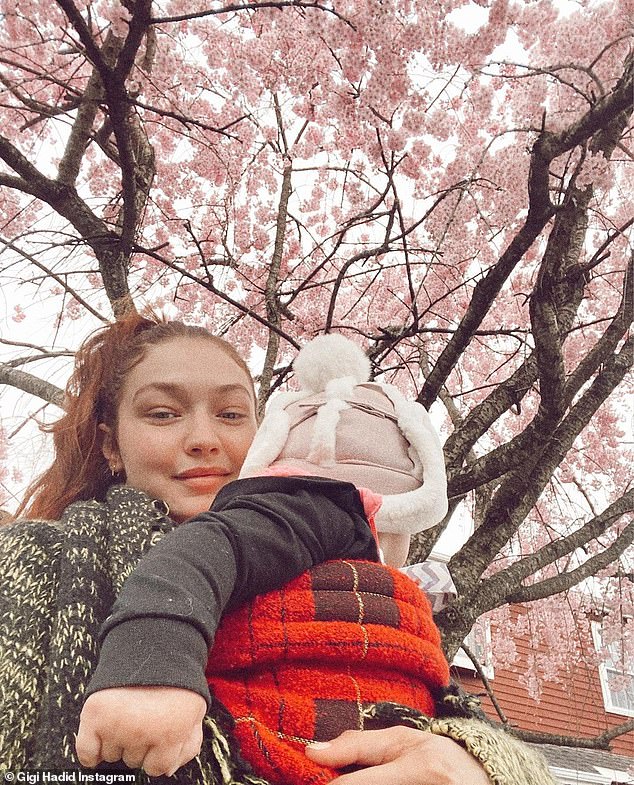 Gigi Hadid shares a selfie with her daughter Khai, seven months, at her mom’s farm in Pennsylvania