“What’s happening? Please go! I don’t want you here!” Shudder has unveiled an official trailer for an indie supernatural fairytale horror film titled Martyrs Lane, the latest feature directed by actress / filmmaker Ruth Platt. Based on her own 2019 short film. This just premiered at the Fantasia Film Festival in Montreal this month. Leah, age 10, lives in a large vicarage, full of lost souls and the needy. In the day the house is bustling with people; at night it is dark, empty, a space for Leah’s nightmares to creep into. A small, nightly visitor brings Leah comfort, but soon she will realize that her little visitor offers knowledge that might be very, very dangerous… This stars young actors Kiera Thompson & Sienna Sayer, with Denise Gough, Steven Cree, Hannah Rae, and Anastasia Hille. “Martyrs Lane is a deeply personal film that explores love and grief through a dark and captivating ghost story.” This looks very creepy, especially that ghost girl. 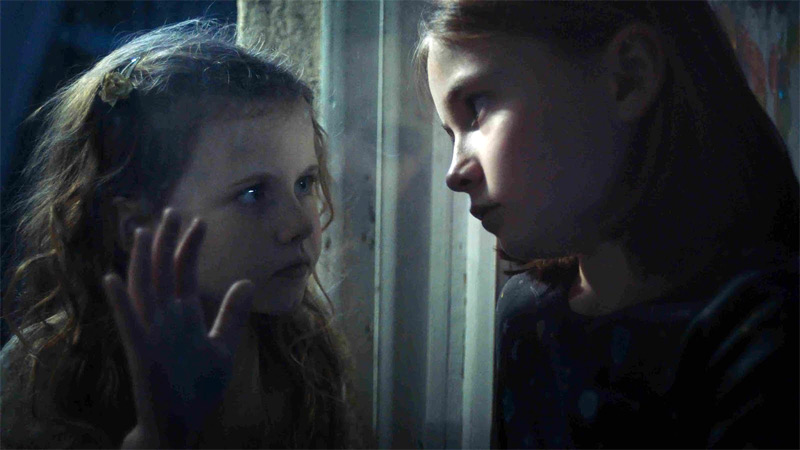 In this unsettling ghost story, Leah, 10, lives in a large, old house with her family but can’t quite work out why her mother seems so distant. At night she is visited by a mysterious guest, who might be able to give her some answers. With a new challenge every night, Leah is rewarded with bits of knowledge that, when pieced together, threaten to shine a dangerous light on both the truth in her nightmares and of the world she lives in. Martyrs Lane is both written and directed by British actress / filmmaker Ruth Platt, director of the films The Lesson and The Black Forest previously. It’s pdapted from her own short film of the same name. Produced by Christine Alderson and Katie Hodgkin for Ipso Facto Productions. This is premiering at the 2021 Fantasia Film Festival this year, and also at the Edinburgh Film Festival. Shudder will then debut Platt’s Martyrs Lane streaming on Shudder starting September 9th, 2021 coming soon. Want to watch?