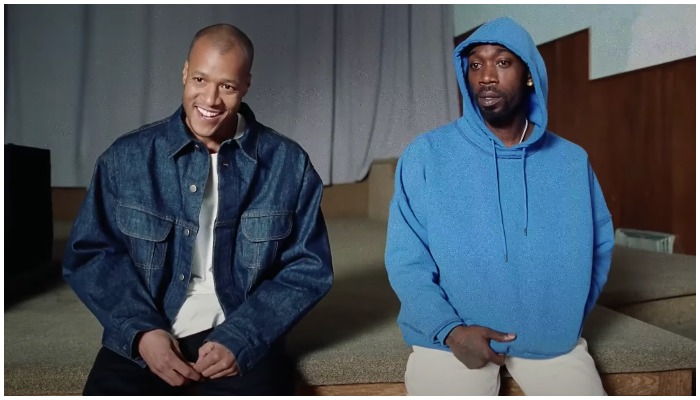 Early in April 2021, Calvin Klein—American fashion house, universal byword for understated cool and, also, underwear with the name of a bisexual icon printed onto the waistband—announced the appointment of Heron Preston as the brand’s new creative consultant. One of those amorphous roles that doesn’t necessarily mean anything at all but which, in the right hands, could easily mean something very special.

An artist, streetwear pioneer, DJ and creative director whose clothes betray an impish sense of humor, Preston is a divisive choice for a label like Calvin Klein, representing as he does a very particular generation of creatives—those who came of age at the turn of the millennium and who, for better and for worse, were the first to really immerse themselves in the possibilities of the internet.

In that sense, then, the fact that—in a 2016 article for GQ—writer Jake Woolf posited that “Heron Preston May Be the First ‘Instagram-First’ Fashion Designer” is no real surprise. Or, if there were a surprise, it would be that no one else of his generation had yet been called that.

Still, what does stand out as strange is that Preston should find himself at Calvin Klein—a legacy brand, by all accounts, established in 1968, with a very clear sense of history and heritage, and a very well-defined way of doing things.

With his first campaign, however—a short film featuring his friends, peers and loved ones—Preston has made it clear that his millennial attributes are what make him perfect for the job: connection, intimacy, honesty, collaboration—a way of being very much forged on the internet. A youth spent on tumblr. On LiveJournal. On Myspace. Those digital spaces that have given us so much and which are still paying dividends today.

Calvin Klein has always worn its heart on its sleeve as a brand, as much as its name has been worn around the waists of people the world over. In this video, up close and personal with a notably improvised feel—and with a fitting nod to CK ads from the ’90s—Preston’s collaborators do the same.

Read more: Fashion loves metal, and these crossovers are all the proof you need

In doing so, they also bring their personalities to the table: names such as Lil Uzi Vert, Nas and Kaia Gerber feel less like the mega stars they undoubtedly are and more like the people they also, equally undoubtedly, are.

A veritable feast of talent, we’ve broken down the big names from the video and explained just why you ought to know who they are.

Unless you live under a rock, which honestly might have been preferable this last year, you most likely know Symere Bysil Woods’ alter ego Lil Uzi Vert.

Frequently dressed like he just bought out a whole Hot Topic on his way to also buy out a high-end jewelry store, Uzi’s blend of emo and trap combined with his Uncut Gems-meets-Myspace aesthetic makes him something of an oddity—not just a genre-bending talent but someone truly immersed in the subcultures he borrows from.

Occasionally overshadowed by his long-running—but nowadays entirely resolved—beef with JAY-Z, Nas is one of modern hip-hop’s true originators, a leading light of the New York rap scene, and was rightly tipped even in his earliest days as a potential successor to Rakim for the quality of his freestyles and the lyrical potency of his rhymes.

Given the distinctly archival flavor of Preston’s first collection for Calvin Klein, Nas makes for a perfect choice to lead the campaign’s ensemble cast—carrying a sense of weight, credibility and legacy that has almost certainly influenced every other artist involved.

A mainstay on the skating scene for over a quarter-century, Stevie Williams got his break in 1994—at the ripe old age of 12—recording a part for Element’s Fine Arts Vol. 1 skate video, appropriately under the moniker of Lil Stevie. By the time he was 18, Williams had modelled for Zoo York, joined Chocolate Skateboards and designed his own signature shoe for DC.

Founder of the DGK label—that’s Dirty Ghetto Kids, in case you were wondering—Williams also happens to appear in no less than five Tony Hawk video games. Which, realistically, is about as legit as it gets.

Since first picking up a camera at 14, Renell Medrano has been photographing the people of New York City, whether they’re friends, family, artists, creatives, collaborators or just, well, people. Having shot everyone from Tyler, the Creator to Bella Hadid by the age of 27, Bronx-based Medrano is best known for the authentic quality of her photographs—for capturing the kinds of fleeting moments that most people could easily miss.

It’s a great fit for the Preston campaign. The video, after all, is shot with the intention of feeling ad hoc, almost candid. Throwing Medrano into the mix is an interesting reversal of that.

A Canadian singer and actress from Toronto, set to star in the upcoming Gossip Girl reboot, Jordan Alexander probably ranks among the least well known of Preston’s illustrious collaborators—even as a rising star in her own right.

But, honestly, that’s kind of the point: Why would Calvin Klein’s new creative consultant want to spend all of his time looking back when he could be looking forward? Filed under “one to watch.”