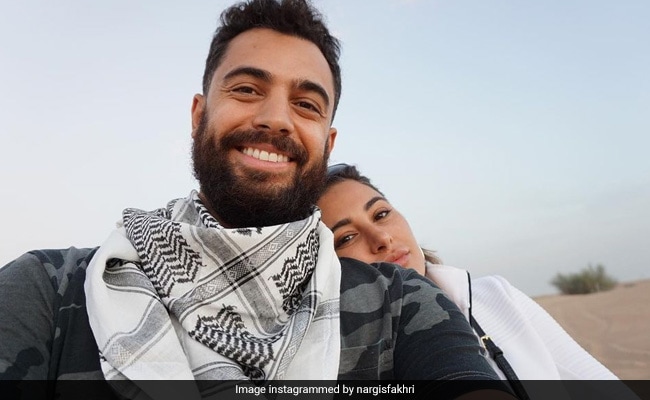 Actress Nargis Fakhri, who is dating Justin Santos, an American chef, “loves” to eat what he cooks for her. Nargis’ recent Instagram upload is proof. On Tuesday, Nargis, who is staying with Justin in New York, posted a funny clip of their dinner date on the platform. The couple watched Sean Penn’s 2003 film Mystic River at dinner last night. In the clip, Justin can be seen preparing a delicious chicken meal. We couldn’t ignore Nargis’ funny expressions in the clip at the end. Going by her reaction, Nargis seems quite satisfied with the preparation of their date.

In her caption, Nargis wrote, “When he loves to cook and you love to eat,” and added hashtags such as #cookforme #food #cooking #chef #justinthekitchen #yummy #imhungry #feedme #couplegoals #mymancooks #goodfood.” The Rockstar actress added the song I’m So Hungry by Karter Zaher in her video. Nargis and Justin are truly couple goals!

Nargis had earlier shared a picture with Justin Santos on her Instagram handle on the occasion of Valentine’s Day in February this year. She wrote, “So far you’ve been (r)ight. So Happy Valentine’s Day boo thang. Tonight we’re on a virtual date.”

Nargis Fakhri has been dating Justin Santos for quite some time now. Before Justin, Nargis was in a relationship with filmmaker Matt Alonzo. She also dated actor Uday Chopra from 2014 to 2017.

In terms of work, Nargis Fakhri made her acting debut in Imtiaz Ali’s Rockstar in 2011. Nargis was paired opposite Ranbir Kapoor in the film. Nargis has also worked in films such as Madras Cafe, Main Tera Hero, Azhar and Housefull 3 among others. Nargis was last seen opposite Sanjay Dutt in Netflix film Torbaaz in 2020.