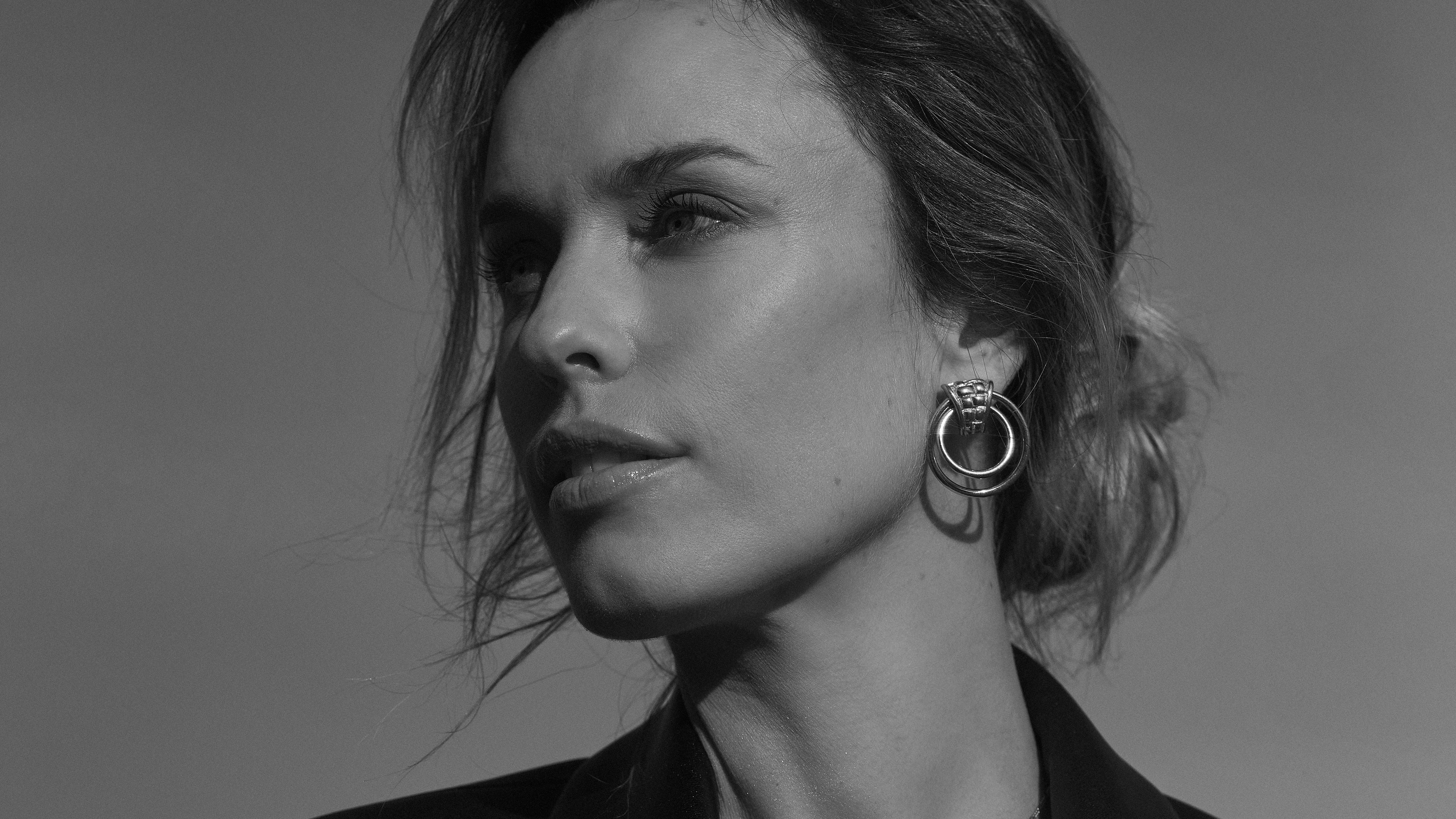 Australians will recall growing up with Jessica McNamee on the television – think Home and Away and Packed to the Rafters. For young girls like me she was everything I wanted to be: the carefree girl next door. Fast forward a number of years and the 34-year-old has evolved with her career. She’s still everything I want to be but with a distinctly different feel; a woman with a commanding presence. This time it’s thanks to her latest role in Mortal Kombat.

Adapted from the video game of the same name, the film follows MMA fighter Cole Young who seeks out Earth’s greatest champions in order to stand against the enemies of Outworld in a high stakes battle for the universe. After a gruelling audition process – the actress tells GRAZIA she filmed three self-tapes – McNamee stepped forward as the film’s leading lady for the role of ‘Sonya Blade’.

As the franchise’s first female fighter it would have been no easy feat to command a room full of men or as the actress notes, deal with hormones and a monthly cycle on set. The physical element to the role was what excited McNamee and as a result a sort of epiphany was experienced: “I can’t believe how strong girls are.”

Off the back of its release, GRAZIA spoke with the actress on preparation, that Cardi B endorsement and how she hopes the role will inspire other women.

GRAZIA: How did this opportunity come about? I’ve read that you filmed several self-tapes before you got it right.

Jessica McNamee: “I was in Australia at the time, so I couldn’t go into the room to audition [in LA]. I was performing another project [in Australia] so basically, I kept roping in different cast members after long days of work to re-tape with me because I wasn’t happy with my first take, I wasn’t happy with my second tape and finally by the third time I was like ‘Ok I think that’s alright to send’. It was probably over a two week period that I kept retaping.’

What was it about the film that made you want to work so hard?

JM: “I think these kinds of roles are so few and far between, these really strong, iconic characters. Of course, I knew who Sonya Blade was from the video games and I knew that I had a red hot go at it. I knew that there would be a lot of physical elements required from whoever was to book this role and that side of this industry is something that I really enjoy – the physical side of acting.”

Talk to me about the preparation that went into “Mortal Kombat”. As you’ve mentioned, I can imagine it being incredibly physical and technical.

JM: “We had about six weeks from me touching down and starting filming so it was great I had a six-week period on the ground where I could get fit and learn as many skills as possible. That involved a personal trainer which was six days a week… I had martial arts training with Nino Pilla who is this amazing Australian martial artist and teacher he has schools all over the world. And I got one-on-one time with him for five days a week. He was teaching me how to fight, how to stand, how get my two hands coordinated enough to make it sellable that I could win a fight if I had to.

“And then I had the whole amazing stunt team; Kyle Gardiner who was the stunt coordinator and a guy called Chan Griffin who taught me stunts as well. Plus, my stunt double Zia Kelly who is just such a badass.”

What did a day look like on set for you during filming?

JM: “It was intense. Because of the locations and a lot of them being real locations rather than just a studio, we had crazy days with a lot of night shoots and a lot of really early mornings.

“Usually, I’d get picked up around 4am and then be in hair and makeup from about 4:30am till 6:30am and then if it was a stunt heavy day that would usually involve warming up and going over the stunt routines while I was trying to eat breakfast. Then we would have a whole day on set where it would either be with one of the stunt coordinators filming all of the action sequences, and we would just be going over and over and take after take of the fights. Or we’d be on set with Simon McQuoid who was the director, and it would be a lot of acting scenes. Sometimes you’d go between the two sets.

“I would usually get off set around 8pm, out of hair and makeup and at home to bed, by about 9 or 9:30, and I’d do the whole thing again for six days a week. It was about five months of that.”

What did you learn about yourself through that really tough, intense period?

JM: “That it’s hard to be a woman in this industry. Dealing with being a woman and hormones and your monthly cycle on a set where I was the only girl there. Dealing with that I thought, these guys can just get up every day and go to set… we’re badass basically. I’m waking up with the worst cramps, having to get in a harness and be swung around and have the hell kicked out of me. These guys don’t have to deal with any of that.

“I can’t believe how strong girls are. That’s what I was thinking.”

For women watching this film, what do you hope they take from your character ‘Sonya Blade’?

JM: “I would love for them to really get the confidence to hold themselves in a group full of men and be able to stand up for themselves. Sonya in this movie not only holds her own but it’s against these strong characters that are men. Not only does she hold her own but she’s leading the charge…”

Cardi B took to Instagram recently to rave about the film. What was your initial reaction when you saw the video?

JM: “I was so excited. We’re still in a bubble in LA and things are starting to open up but we’re still walking around in masks. We’re not having that interaction…I’m not getting that instant face-to-face with people. So there was something about that that was really real. I was like, ‘Woah, this is out there now.’ Out there on a really big scale.”

When COVID-19 hit many films were not being released into cinemas. Were you worried the same kind of delays would affect “Mortal Kombat”?

JM: “Yes absolutely. It was touch and go there for a minute because we had to do some reshoots and there were also safety concerns. We finally got those reshoots squeezed in in November, so they obviously needed those to finish editing the film. We were lucky in the end that those got done and that we could release the film. It was originally going to be January and they did push it to April which is great for us because now people are back in cinemas – January would have been a very different story.”

You’ve worked alongside Steve Carell, Emma Stone, Channing Tatum in the past. What is one piece of wisdom that they have imparted on you?

JM: “I think the nicest people that I’ve worked with are some of the most high profile stars. I think that in and of itself is something that they didn’t impart on me, but observing them and how they handle themselves with such grace and kindness, genuinely I think that’s something I’ll always take with me. I think there’s something to be said with people that are successful and kind in this industry, I think they get the furthest, as they should. It seems like a no-brainer to be kind to people that you work with but there are people in this town who aren’t necessarily that way inclined.”

What’s next for you, what are you working on, what can you see happening in the future?

JM: “It would be great if we went into a whole “Mortal Kombat” universe that’s for sure. I loved this role and I would definitely continue playing Sonya for as long as I can. There’s so much more to this whole universe which I learned along the way of backstories and relationships. So that would be the dream really. I want to get back to Australia to work now that I’m vaccinated.”

Mortal Kombat is in cinemas now.