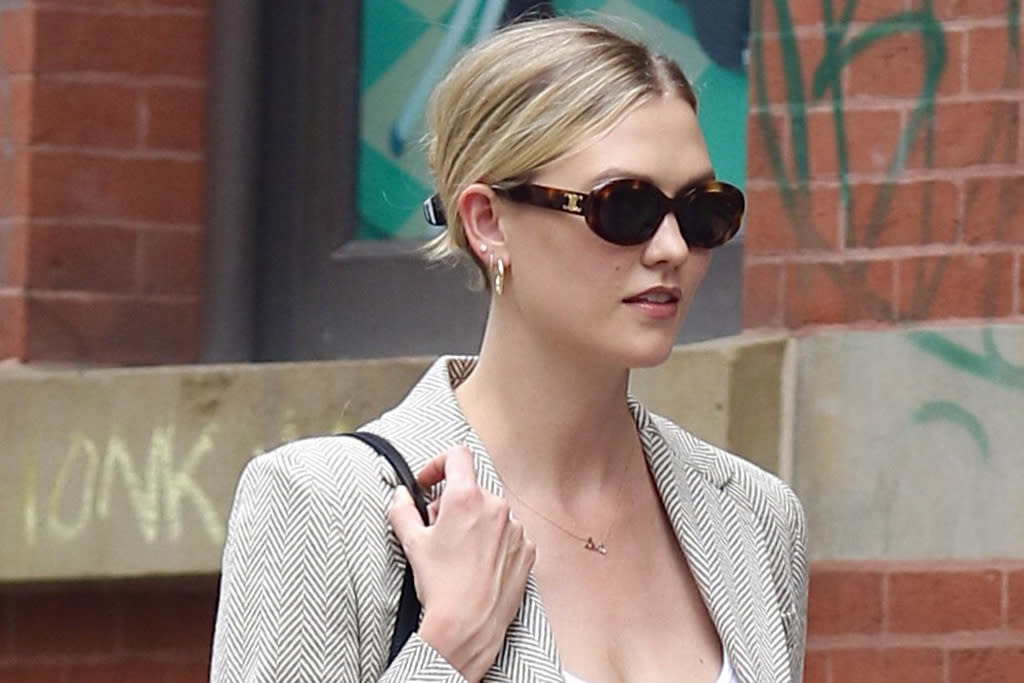 Karlie Kloss is ready to party — in sky-high mules, no less.

The supermodel hit the town this week for the New York Botanical Garden’s Spring Gala, which celebrated the venue’s new Kusama: Cosmic Nature exhibit. To celebrate the occasion, Kloss arrived in a structured Atelier Biser corset top and black Mônot trousers. Accessories included a pile of diamond necklaces by Briony Raymond New York and statement-making David Webb drop earrings. The model took to Instagram to share a look inside the Gala, posing alongside florals and Kusama’s signature polka dot sculptures.

Corset tops have become a favorite among the celebrity set over the past year, due to a newfound nostalgia for aristocratic glamour and femininity. The style’s taken the fashion world by storm, igniting fervor for archival styles by Vivienne Westwood and new versions by brands including Dion Lee. Stars such as Bella Hadid, Kourtney Kardashian and Sofia Richie have all previously worn the strapless style in a range of materials and colors, cementing its place in the wardrobes of the A-list.

To complete her look, Kloss slipped on a pair of black leather Versace mules. The sandals boasted 4.5 inch heels, square toes and a twisted leather strap, which added a burst of texture to her ensemble. The black leather also made them particularly versatile, able to dress up both casual and formal ensembles. Kloss’ mules currently retail for $995 on Farfetch.com.

Mules are another style that stars favor in the warmer months, as a literal elevation from the standard slide sandal. Brands like Bottega Veneta, Cult Gaia, and The Attico have all introduced square-toe versions of the retro style for summertime looks, which have been welcomed into the wardrobes of celebs like Kaia Gerber, Rihanna, and Rosie Huntington-Whiteley.

The Veuve Clicquot-sponsored party was notably the Off-White model’s first since giving birth to her son, Levi Joseph, who she welcomed with husband Joshua Kushner in March. (Kushner was absent from the event.) The model shared this fact by posting follow-up images showcasing her makeup by Hung Vanngo and wavy ‘do by Renato Campora. “Mama’s first night out,” Kloss captioned the shots.

The Estée Lauder global spokesmodel’s look for the Gala followed her signature streamlined style, which often features mini dresses and suiting that accentuate her figure. The model also spotlighted her aptitude for versatile footwear earlier in the week, when she strolled through Soho in a sharp pair of Gucci loafers with Levi and mother-in-law Sheryl Kushner.

Kloss’ Versace mules followed her go-to’s for formal occasions, often strappy sandals and pointed-toe pumps by Roger Vivier, Giuseppe Zanotti and Aquazzura. When off-duty, the model prefers loafers by brands like The Row, Khaite and Kurt Geiger, as well as sneakers by Adidas — which she co-designed a collection with last December.

The former Victoria’s Secret Angel is a longtime member of the fashion community; she’s starred in campaigns for Versace, Dior and Marc Jacobs, among other renowned high-end brands. She’s also worked as an ambassador for Express, Swarovski, Carolina Herrera Fragrances and more. Outside of fashion, the star is also the founder of Kode With Klossy, a company that empowers girls to learn to code and become tech leaders.

Click through the gallery to find more of Karlie Kloss and Joshua Kushner’s couple style over the years.