Welcome back to The Rundown, our daily breakdown on comic news stories we missed from the previous day. Have a link to share? Email our team at rundown@multiversitycomics.co.

In case you missed it, BOOM! Studios joined the #DisneyMustPay cause, and Batman’s faithful butler Alfred is getting his own solo with “Pennyworth.” 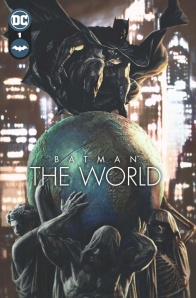 – DC announced “Batman: The World,” a 184-page anthology featuring international creative teams, each telling stories of the Dark Knight set in their home country. These include Mathieu Gabella and Thierry Martin from France, Carlos Estefan and Pedro Mauro from Brazil, and Japanese writer/artist Okadaya Yuichi. Brian Azzarello and Lee Bermejo, known for their work on “Batman: Damned” and “Joker,” will reteam to open the anthology with the framing story “Gotham City,” representing the United States. The book will be available digitally and in hardcover on Tuesday, September 14, 2021, in time for Batman Day 2021 on Saturday, September 18.

– Five graphic novels from award-winning cartoonist Joe Sacco are now available digitally. Thanks to a deal between Amazon and publisher Fantagraphics, “Palestine,” “Safe Area Goražde: The War in Eastern Bosnia 1992-1995,” “But I Like It,” “Notes from a Defeatist,” and “Bumf Vol. 1: Buggered the Kaiser,” are now available on comiXology and Kindle. “Safe Area Goražde” in particular is a notable inclusion: Sacco wrote the book after spending five month embedded in war-torn Bosnia, and would be awarded both an Eisner and an Eagle Award for his efforts. Time Magazine would dub it the Best Comic of 2000.

– Jonathan Hickman promises to reveal the secrets of Krakoa this September with a new X-series. Marvel has released teaser images for “Inferno,” featuring images of Professor Charles Xavier, Magneto, Mystique and Moira MacTaggert, key players in Hickman’s current run. While plot details are scare, the events of “X-Men” #20 may offer some insight into what secrets the new series will reveal, as well as the ‘Reign of X’ timeline released by Marvel last month.

– Netflix announced several new additions to the cast of its upcoming adaptation of DC/Vertigo’s “The Sandman.” The announcement was made over the streaming service’s Twitter, featuring the new cast members, along with their roles and pronouns. Notable additions include Kirby Howell-Baptiste (Killing Eve, The Good Place) taking on the role of Dream’s sister Death; Mason Alexander Park and Donna Preston as Desire and Despair; David Thewlis (Wonder Woman) as sadistic killer John Dee; newcomer Kyo Ra as Rose Walker, and Stephen Fry as her protector Gilbert; Patton Oswalt as the voice of Matthew the Raven; and Doctor Who alum Jenna Coleman as Johanna Constantine (ancestor of DC’s “Hellblazer” John).

– Aaron Taylor-Johnson (Kick-Ass, Tenet) will portray classic Spider-Man villain Kraven the Hunter in Sony’s upcoming Kraven solo film. Taylor-Johnson has been contracted for multiple projects as the Russian aristocrat-turned-big game hunter, with Sony calling the upcoming project the next chapter in their universe of licensed Marvel characters. J.C. Chandor (A Most Violent Year, Margin Call) will direct, with a script by Art Marcum & Matt Holloway and Richard Wenk. Kraven the Hunter is set to hit theaters January 13, 2023.

– 17 actors have been announced for Disney+ series Just Beyond, based on the BOOM! Studios series from Goosebumps author R.L. Stein and artists Kelly & Nichole Matthews. Christine Ko (Dave), Malcolm Barrett (Preacher), Riki Lindhome (Knives Out), Tim Heidecker (Us), Henry Thomas (Stargirl) and Izabela Vidovic (Supergirl) are among the names announced for the eight-part supernatural anthology, produced by 20th Television for the streaming service. Stein himself will executive produce alongside Seth Grahame-Smith.

– In more Disney+ news, Happy Gilmore star Christopher McDonald has joined the cast of Marvel’s upcoming series Secret Invasion. McDonald’s role has yet to be revealed, but he joins a cast that includes Samuel L. Jackson and Ben Mendelsohn, both of whom resume their MCU roles in the streaming project. The character is rumored to be a “newly created” one, with the potential to reappear in other MCU projects.

– Following Rob Liefeld’s departure from the series, Archie Comics announced that David Gallagher will take over writing duties for “The Mighty Crusaders: The Shield.” Archie also announced the book would shift from a miniseries to one-shot. Gallagher, whose credits range from the supernatural webcomic “High Moon” to the Tom Clancy Ghost Recon games from Ubisoft, will script over Liefeld’s finished pages. Jack Morelli will continue on as letterer. Liefeld left the book suddenly after a retail variant cover featured a series spoiler. “When the key plot point/element is revealed on a retail variant cover – it’s probably time to exit the stage on this one,” Liefeld said of his decision.

– Finally, Penn State University Press has announced its Fall/Winter 2021 catalog. The catalog includes several titles from its graphic novel imprint Graphic Mundi, including “Hakim’s Odyssey, Book 1: From Syria to Turkey” from Fabien Toulmé. The entire listing can be downloaded from the university’s website in PDF-format.