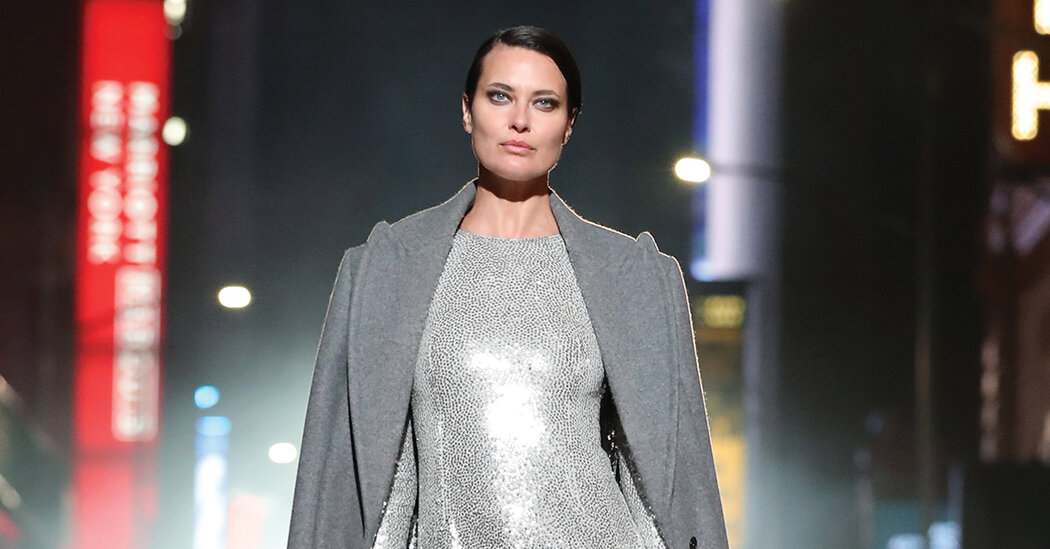 New York fashion is throwing its weight behind the return of New York City.

Just one week after the Metropolitan Museum of Art announced that its next big costume show would be devoted to American designers, Michael Kors held an actual show — one marking 40 years in business — using 45th Street as a runway, the lights of Broadway as a backdrop and a cast of supermodels past and present to make a bet on the future of the metropolis in double-face cashmere and crystals.

“The other day we were at Balthazar for dinner again,” Mr. Kors said in a socially distant one-on-one presentation the day before the video bowed, “and just walking to the bathroom was an event! We’ve been missing that head-turning moment. But I think the ‘entrance’ is going to return.”

To that end, his show was not just a show, but also a P.S.A. for the theater community (Mr. Kors is a famous theater buff, attending an average of three shows a week in prepandemic times) and a statement of belief in the allure of perfectly polished power sportswear.

It began at Sardi’s, the classic theater eatery, where the cartoon portraits of stars including Bette Midler, Billy Porter, Debra Messing and Matt Bomer suddenly came to life and started bickering, riffing, praising Mr. Kors and chatting up the Actors Fund, which has been focused on helping the less heralded denizens of the theater survive during the pandemic closures.

Then Shalom Harlow exited the restaurant in a white tuxedo jacket, black shirt and black trousers, began to sashay down the middle of the street, and a parade of greatest hits began.

As Rufus Wainwright crooned “City Lights” and “New York State of Mind” on the stage of the Shubert Theater, out came luscious camel halter-necks and ivory body-conscious knits; windowpane-check miniskirt suits, giant zebra sheepskin parkas and boss lady suiting. Mr. Kors has always had the ability to make an apparently simple garment — a knee-length skirt slit up each thigh just so, a jacket tossed over a shoulder — look ineffably expensive (it’s his superpower), and that skill was on full display.

Indeed, 16 looks from the archives were remade as part of the collection, including a lipstick-red patent leather car coat originally worn by Cindy Crawford in 1991, now modeled by Bella Hadid atop a matching red turtleneck sweater dress. It all culminated in gold and silver mirrored T-shirt dresses and tank gowns; posh puffers lined in faux fur and sequins; and a gray flannel tailored jumpsuit pinstriped with Swarovski crystals.

You want to know what people are going to wear to the Met Gala come September? Here’s your answer.

And Mr. Kors was not the only designer getting ready for The Return. In London, Riccardo Tisci presented his first solo women’s collection for Burberry (since he joined the brand in 2018, he has always shown men’s wear and women’s wear together) in the environs of the brand’s Regent Street flagship. It was sort of a statement of belief in the potential of shopping: We will go out to browse again!

And when we do, what will we see?

“I believe after lockdown we all want to dream,” the designer said, speaking via videoconference from Italy, where he was visiting his 92-year-old mother. “But dressed up doesn’t have to mean uncomfortable.”

That meant a spoken word performance by the British rapper and D.J. Shygirl, wearing a flesh-toned bodysuit and musing on “Mother Nature.” It meant graphic color-block silk dresses inspired by deconstructed flags (national, heraldic, you name it) and jigsawed together in asymmetric patterns and layers; chubby faux fur coats dangling fat rabbit’s-ear fringe at the hem; narrow tailoring with an added panel, like a cape, at the back; fringed leather and jersey covered in small hammered-gold discs, like very sinuous armor.

Despite some inexplicable flaps on trench coat lapels and trouser hems — seriously, what is it with the flaps? — the result was a tighter, more streamlined presentation than Mr. Tisci has given for the brand. Less mired in British heritage and the desire to be all things for all people, and more like what you might want to wear to a futuristic jousting tourney.

Well, that could be what city streets look like next.