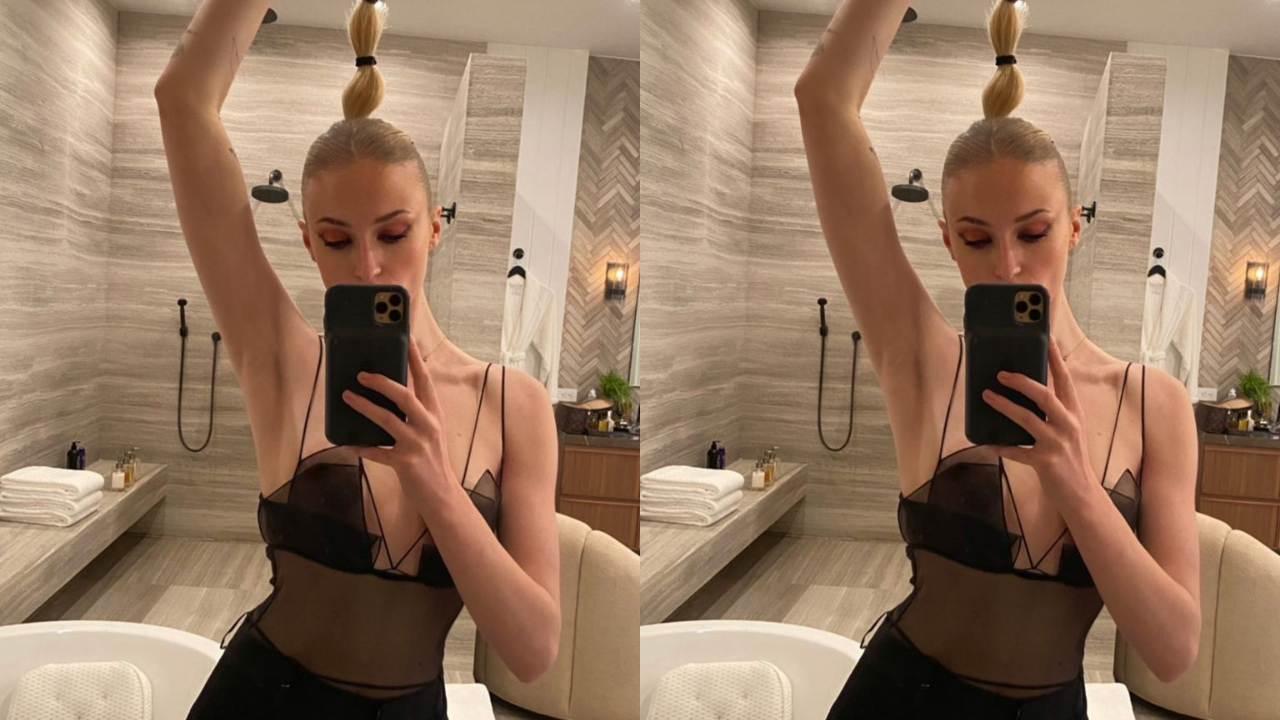 Game of Thrones alumni, Sophie Turner, has quietly cemented herself as a style icon with her latest sartorial moment all the proof needed. In the lead up to date night with Joe Jonas at the weekend, Turner snapped herself in a Instagram story wearing a sheer bodysuit and black pants. Her hair was slicked back into a high bubble pony tail – very noughties-esque of the actress.

Later reported by the Daily Mail, Turner was seen with her husband at Il Pastaio in Beverly Hills and finished her look with a crisp black blazer and strappy heels.

If you have the feeling you’ve seen this ensemble before, you’d be nearly correct. The ‘underwear worn as outerwear’ trend was sparked when Bella Hadid wore a  similar sheer bodysuit for the VMAs in August 2020. Hadid’s near-naked iteration instead featured an off-the shoulder feature. Both designs are the brain child of London-based Albanian designer Nensi Dojaka.

Speaking with Forbes, the Central Saint Martins graduate describes her customer as “a confident woman that is not afraid to look different and to break that preconception of a pretty ‘dress’.”

“I have researched so much into ’90s magazines because I love the clothes, the aesthetic, and even the way pictures were shot at the time. There’s something raw and soulful that I really wish to bring back,” Dojaka explained to the publication. “So, I do reference the ’90s a lot in details, etc. But then it’s all mixed up with my drapes and personal taste which is also influenced by what we see now, the society, the reality of now.”

“There’s that mixture of severity and duality which I play a lot with, and it’s definitely how I would sum up the aesthetic,” the designer added.

In early May, Turner shared never-before-seen images of her vibrant Vegas wedding which of course featured a modern take on the silk wedding dress. The actress instead opted for a white jumpsuit finished with a delicate peplum waist.