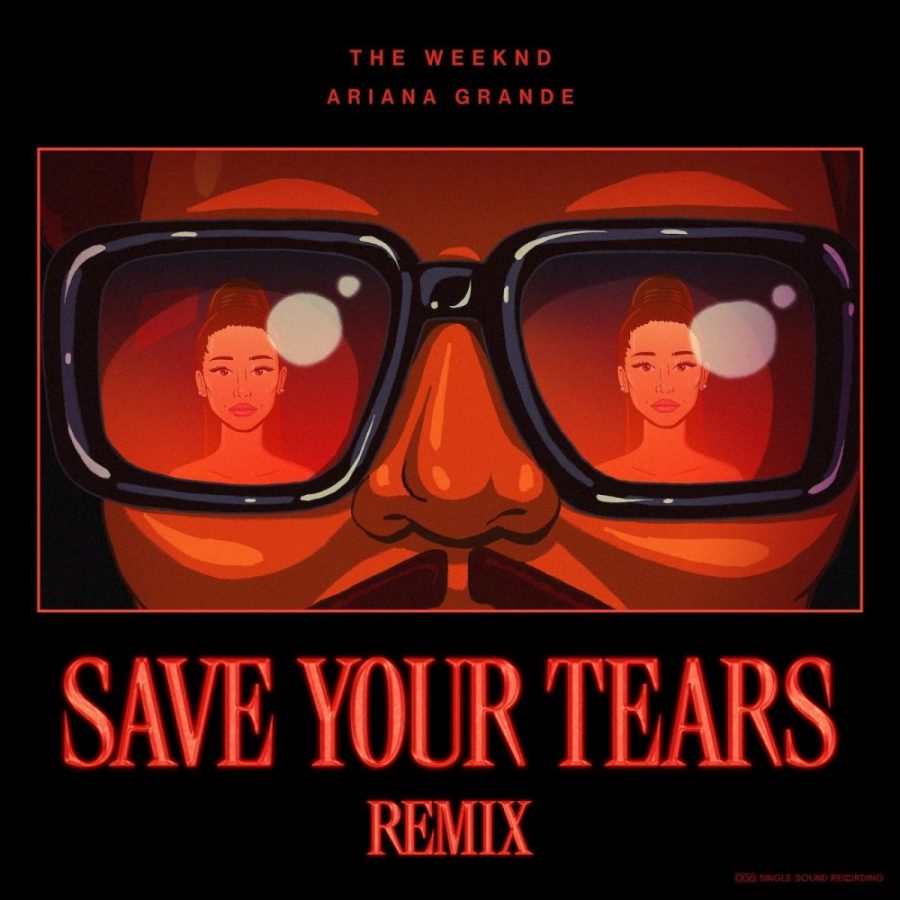 A new remix from the duo dropped on April 23

Arguably one of his most popular songs, The Weeknd’s “Save Your Tears” has kept “After Hours” at the top of the Billboard charts since its initial release. To many fans’ surprise, the award-winning singer teamed up with Ariana Grande to produce a new remix of the single, which dropped on Friday, April 23.

The two artists hinted at joining forces on Twitter, with The Weeknd posting a brief audio clip of their two voices harmonizing together through the lyric, “I don’t know why I run away” from the original “Save Your Tears.” Social media exploded with excitement and anticipation, as The Weeknd and Grande have worked together in the past on previous projects. The two have three collaborations over the past seven years, including Grande’s “off the table” of her album, “Positions,” and “Love Me Harder” of her 2014 album “My Everything.”

Created as a remix, this new version does not drastically differ from the original in terms of content and structure, but features a fresh verse from Grande: “Met you once under a Pisces moon / I kept my distance ‘cause I know that you / Don’t like when I’m with nobody else / I couldn’t help it, I put you through hell.” Along with these four creative lines, Grande shows off her strong vocal range by vocalizing behind The Weeknd’s lead throughout the song. Singing about a romance gone less according to plan, the duo’s voices pair extremely well together and preach to the much-needed strength surrounding lost love.

Beyond the main streaming platforms, “Save Your Tears (Remix)” dropped an animated music video on Youtube. Known for his notable red blazer and black sunglasses, The Weeknd is visually captured as he creates a doll-version Grande look-alike in a futuristic setting. Interestingly, this video seems to replicate the delicacy of the partnership between The Weeknd and Grande as the robotic parts are carefully selected in many scenes. Once the complex creation is finished, the two face each other and their hands gravitate towards one another as a bright light shines in the background. The final thirty seconds shows the factory’s machines powering down, while Grande’s doll figurine is placed in a large pink box labeled “Ari” with a heart, alongside The Weeknd in the desert’s mountains.

The Weeknd’s original version of the single spotlights his past relationship with model Bella Hadid, which references mistakes he made at times, as well as the widening divide that he felt while Hadid drifted further away from him. Inspired by an upbeat 80s tempo, “Save Your Tears” clearly expresses the guilt of breaking someone’s heart and leaving them behind as a result. However, Grande’s high-pitched vocals lift the mood of the song, as this and the steady beats combine to generate euphoric energy. Although the “After Hours” version will most likely attract more listeners, the addition of Grande’s harmony and brief solo makes for a unique spin-off.

Given their history of collaborations, it will be interesting to see whether The Weeknd and Grande continue to work together on upcoming album releases. Under Grande’s latest Instagram post through which she shared the remix, MTV boldly commented, “I HAVE NO NOTES. IT’S PERFECT,” along with numerous celebrity figures praising the duo’s compatibility. Given the tremendous uproar in reception, The Weeknd and Grande appear to be a competitive, perfectly fitting match.

“Save Your Tears (Remix)” is currently available on streaming platforms.