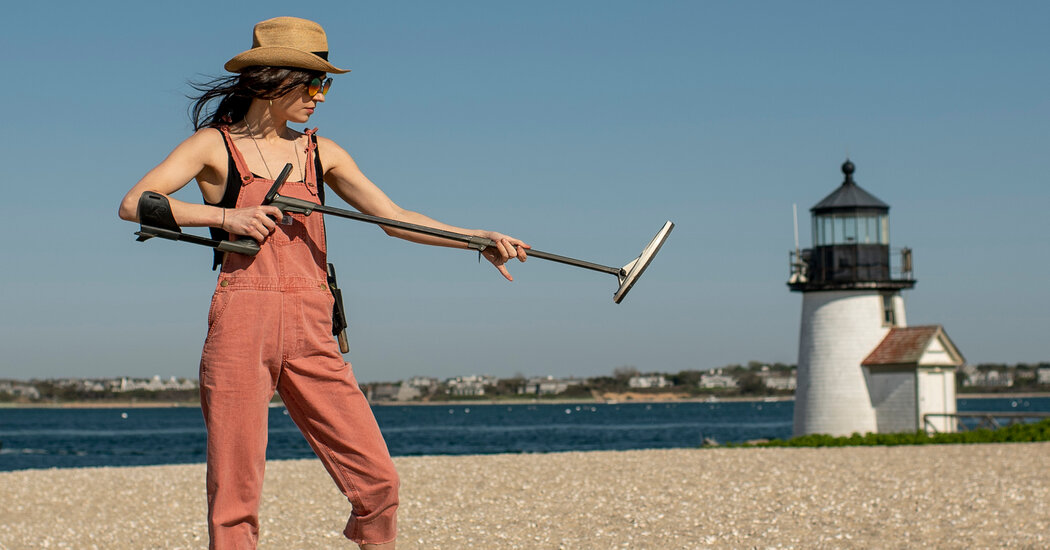 People have been metal detecting since 1881, when Alexander Graham Bell invented a device to find the bullet lodged in President James Garfield.

But it took several more decades for recreational metal detectors — devices that resemble “sort of a skillet on the end of a pole,” as one newspaper put it in 1927 — to develop a serious cult following.

Now, that cult following is growing. Detector makers are reporting record sales. According to an annual report from one brand, Minelab, in 2020 the company sold 30 percent more detectors than the previous year, which had climbed 18 percent the year before that.

And we are in a bit of a detectorist media moment. New York magazine is making listicles of the best metal detector models. Drew Barrymore is giving them away on her show. The teenage sketch comedian Parker James is wielding one before his six million TikTok followers. In England, Carey Mulligan is making it mainstream; on Nantucket, millennials are making it fashion; and in the gaming industry, a romantic thriller-meets-metal detecting video game will be released this summer.

While some longtime detectorists relish the hobby’s solitary nature, others have been hungry for more attention. For the past eight years, Michael Bennett, known as “Nugget Noggin,” a 27-year-old gold-prospecting enthusiast in Charlotte, N.C., has been posting YouTube videos of his finds, which include Mercury dimes, Morgan dollars and Civil War-era musket balls and belt buckles.

At first, no one paid much attention. Today, detectorist content creation is his full-time job.

“It was kind of tough when I first started,” Mr. Bennett said. “When people thought of metal detecting they thought of the old guy on the beach. Now, it’s not just men — women are doing it too, and a lot of people my age.”

Detectorist YouTubers and television shows in recent years have helped draw a new audience to the pastime. But more recently, a propelling force of its rising popularity is — you guessed it — the pandemic. In Saunderstown, R.I. this past fall, 150 enthusiasts paid $125 each to hunt on a local farm that was seeded by the event organizers with 1,500 antique coins valued at some $6,000. It didn’t matter that the coins were planted; social distancing was built in.

Detecting offers a relatively safe and entertaining way to explore backyards from East Hampton to Uruguay. In Britain, amateur treasure hunters have found so many artifacts this year, the British government agency in charge of protecting national archaeological heritage is being forced to expand its definition of “treasure.”

For Treasure or Pleasure

A metal detector offers many possibilities — reconnecting with memories of childhood or an escape from the din of our devices, among them — but the biggest draw is the chance of stumbling upon untold wealth.

The hobby’s most significant victories are not only unpredictable but, at a glance, relatively indiscriminate. Take the British driver who, this past October, located an “outstandingly rare” Celtic chieftain’s chariot brooch in a neighbor’s field, which he then sold for 55,000 pounds; or the 10-year-old in Ireland who found a centuries-old sword hilt on his first-ever detecting outing, just down the street from his home.

Perhaps these detectorists were inspired by those who came before them: the 59-year-old beachcomber who, in 1959, found a $1 million worth of buried Spanish gold near his home in Sebastian, Fla., or the pair of Vermonters who in 1957 hit it rich when they detected the country’s richest deposit of vital tungsten ore.

But while success may appear random, there is skill involved, as Chris Turner, the former pro soccer player and current Hollywood stand-in and detectorist, knows well. Mr. Turner, 61, relies on nearly 50 years of experience to help people find precious items that have gone missing.

In 2009, with the support of an anonymous angel investor in Illinois, Mr. Turner turned his one-man service in Vancouver, British Columbia, into a 23-country international directory of hundreds of metal detectorists: TheRingFinders.com.

Prospective Ring Finders undergo an application process, and are vetted by Mr. Turner about everything from their detecting experience and their familiarity with local laws, to their ethics, intentions and client management skills.

Most members of the directory operate on a rewards-only basis, as does Mr. Turner. “That could be a loaf of homemade banana bread to $2,500,” he said. “But there is no reward greater than uniting someone with their lost heirloom.”

According to Mr. Turner, the Ring Finders network located 50 percent more lost rings over the past year than in any other year since the website was created in 2009.

Coil to the Soil

One detectorist-for-hire in the Ring Finders network is Woodrow Engle, 37, a video game designer who took up detecting two years ago as a way to spend more time outdoors. He covers his home region of Sonoma and Marin Counties in California.

So far, Mr. Engle said he’s been on 20 or so recovery missions and recovered missing items about half the time. For one recent job, he accepted a half-dozen freshly laid eggs as a reward; for another, $500 in cash.

While metal detecting fits neatly into the category of “those ‘old people’ hobbies that you’re supposed to pick up once you’re retired,” Mr. Engle said, he has noticed a wave of relative newcomers, many of whom are of a certain age: “They’re all this sub-generation they call the Oregon Trail generation that had a analog childhood but a digital adulthood, so they’re really interested in cool, older stuff — maybe they had a coin collection when they were kids — but they’re not afraid to adopt new technology, and they can figure out how to use advanced machines, like these new detectors that are coming out.”

Ryson Zettlemoyer, a 36-year-old gem cutter, handyman and detectorist operating near Eureka, Calif., agrees that the pastime is growing in popularity and it’s no wonder, he said. According to Mr. Zettlemoyer, there are thousands of documented buried “major treasures” in the United States yet to be found, just from the 1800s alone. His Ring Finder profile notes that he charges a commission on “caches and hoards” of gold treasure.

In the 1930s, thousands of banks closed their doors, while at the same time, the federal government passed an act to seize citizens’ gold. “A lot of people who had gold buried it — and a lot of that stuff is still out there,” Mr. Zettlemoyer said.

“That’s a family’s inheritance,” he said. “So they call people like me to come out and find it.”

As much as there is to be gained, the hobby also has its costs. Daisy Duncan, a 26-year-old detectorist in South Carolina, always finds herself saying “just one more signal,” when she knows perfectly well that she will keep on sweeping for hours — sometimes into the night.

On the upside, there is the rush: “When I am out hunting, it honestly does not matter how I’m feeling because by the end, I feel amazing,” she said. But compared with more expeditious treasure hunting methods — like magnet fishing, which involves swinging a strong magnet along a creek bed or lake bottom and instantly pulling up any “treasure” there is to be had — Duncan said metal detecting “is not just a walk in the park.” In addition to being physically draining and an emotional roller coaster of celebration and disappointment, she said, “it can get expensive.”

Detectors can range from a couple hundred dollars to upward of $5,000. A popular pick for experts is the French-made XP Deus ($949), and for kids, the Nokta Makro Mini Hoard ($120). Detectorists may also carry headphones, a metal detecting shovel, hand tools such as a hori-hori (a serrated, steel hand shovel), a “finds pouch,” and a hand-held precision detector called a pinpointer.

More expensive equipment tends to be lighter weight and more precise. That means the pricier the detector, the better chance you’ll have of distinguishing tinfoil or canslaw (the detectorist term for soda can metal that has been shredded by lawn mowers) from gold bullions.

Attire may include a tool belt, gloves (“You’d be amazed how much glass there is in the ground,” one detectorist warned) and the occasional themed T-shirt (“I’m a Swinger”; “Can I Metal Detect Your Yard?”; or “Coil to the Soil”).

Especially in less-traveled spots, it’s not unusual for a detectorist to dig up trouble: This spring, a local bomb squad was called to respond when a 17-year-old uncovered a World War II land mine in his British village.

In Virginia, sheriff’s deputies were called to the scene when a group of children detected their way to a 150-year-old Union Army cannonball that could have contained explosive black powder. And this past summer, Mr. Bennett said he found a “live grenade” in a river. (I have a video on that,” he said. “It’s called ‘You Won’t BELIEVE What I Found in the River.’”)

And, as these activities draw more participants, more historical objects are being found, which can lead to trouble of another kind.

In France, where metal detecting is illegal, authorities recently seized thousands of Roman coins and other artifacts from a detectorist who had claimed he found the booty in Belgium. Welsh police are currently searching for people who illegally dug up the grounds of a medieval castle. On the outskirts of London, more than 100 holes “typical of metal detecting behavior” have suddenly appeared near the Magna Carta memorial site.

In Britain, digging, scraping or detecting without a permit is forbidden by law. (Happily, this doesn’t impede mudlarking: a surface-only treasure-hunting practice especially popular on the banks of the Thames.)

Navigating the laws, environmental impacts and archaeological concerns means that being a detectorist comes with a complex ethical responsibility, said Nikoline Bohr, an artist in Nantucket, Mass. For Ms. Bohr, 32, and her detectorist friends, it also comes with great outfits.

“When an item is removed from the ground, it loses all context and also its historic value,” she said. If artifacts “are cataloged and made available for research, they can still contribute to our understanding of the past.”

Not all detectorists are interested in cataloging their finds, much less donating them to museum collections. For this reason, Ms. Bohr encourages newcomers to take their metal detecting to the beach, where constantly turned-over sand offers plenty to discover and less to disrupt.

Many of the Ring Finders have at least one story about recovering a lost item that they say simply defies belief, or seems like “a miracle.” For Ms. Bohr, who became a Ring Finder last year, hers took place in September 2020, when she was contacted by a woman about a ring she had received decades earlier as a gift from her godfather.

It had gone missing a month earlier, on a Nantucket beach where Ms. Bohr said “the waves are rough, the dunes are regularly beaten to a cliff, and the currents are unpredictable.” She was not optimistic. “I truly thought there was no way it could still be there,” Ms. Bohr said. “But in a thorough search, it magically turned up.”

Days after, heavy surf hit the beach where the ring had been recovered, carving 50 feet from a nearby bluff on the island and washing away a summer home. “It was really quite incredible,” Ms. Bohr said, about the timing. “The band was inscribed with the word ‘Always.’”