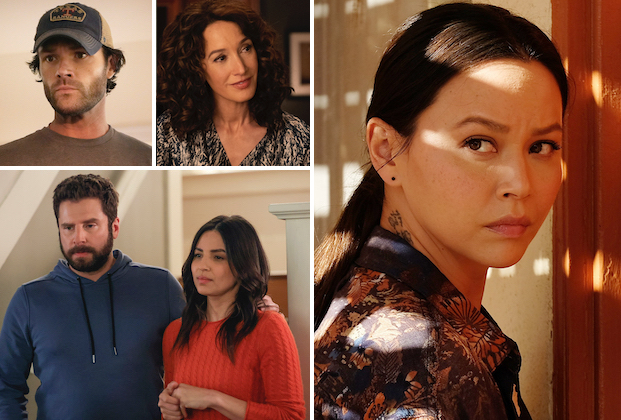 Is The Rookie heading for a wedding? Might A Million Little Things leave you screaming? Who is gone from Chicago Fire? Read on for answers to those questions plus teases from other shows.

Any news on whether The Rookie‘s Wopez wedding will be taking place this season, or is that something we’ll have to wait to see in Season 4? (And since we’re on the subject: How is it looking for a renewal?) — Lexie
As you have since gleaned from the finale promo, Angela and Wes’ wedding day is suddenly upon us in this Sunday’s finale, though it of course does not go off without a hitch. (Let’s just say that at one point, Tim arms himself with a riot shield before delivering some really bad news.) Luckily, a surprising trio of characters band together to (hopefully?) save the day. As for The Rookie‘s renewal prospects, showrunner Alexi Hawley must be feeling optimistic, or he would not have ended the finale the way he did. (Check back Sunday night for a juicy post mortem!)

Can you give us a scoop on The Rookie‘s finale? –Laura
As spotted in the promo, Jenna Dewan (Witches of East End) begins what (pending renewal!) will be an arc as Nolan’s new neighbor and romantic interest. (Just wait until you hear her character’s resume!) But what you may not know is that The 100‘s Bob Morley also appears in the finale, as someone who threatens to be a big problem for undercover Chen….; watch a clip here.

Any scoop on A Million Little Things? –Eliza
Rumor has it that the June 9 season finale of the unexpected bubble show ends on a huge cliffhanger. In other words, if ABC opts against ordering a fourth season you better believe it’ll be a “thing” — and not a little one, at that.

Can you tell me when The L Word: Generation Q will return to Showtime? –Judy
I am hearing that you can count on a summertime premiere for Season 2.

Anything on my new guilty pleasure, Cruel Summer? –Lyssa
Showrunner Tia Napolitano is well aware that viewers are often left frustrated by unsatisfying mystery shows, so she promises that fans of the Freeform drama will “get all the answers” by the end of Season 1. “We knew we had to do this right. We knew we had to deliver the actual truth,” Napolitano says. “We couldn’t fake the audience out. We couldn’t skip over it and just jump forward to a different mystery and brush past it. We knew we had to drill down and uncover the actual truth, and that’s hard. You know there’s a reason a lot of shows are unsatisfying at the end, because it’s very hard to untie that knot that you’ve gotten yourself into. And we were just very thoughtful and very deliberate about it, and I hope we deliver.”

Has there been any update about PBS/ITV’s Victoria, since Jenna Coleman has been cast in a new TV show The War Rooms? Last she said a few months ago, they were still going to do a fourth season and it’s on hiatus. –Amanda
And “on hiatus” Victoria still is, I am told.

Is FBI: Most Wanted still planning on introducing both Hana and Crosby’s parents as previously teased, or has that been pushed to Season 3? –Stephanie
As you correctly intimated, the characters will not be introduced this season after all.

Do you have any intel on where Max and Murphy stand when the third season of In the Dark starts? –Beth
I relayed your Q to showrunner Corinne Kingsbury, who wrote back, “Murphy tends to constantly test those closest to her and Max has reached his breaking point” when Season 3 arrives on June 23. “Murphy is at a loss when it comes to Max and how unresponsive he is to her tried-and-true manipulative tricks.”

Will we get any major Stellaride content during these last episodes of Chicago Fire? –Fiona
Now that Stella has passed her lieutenant’s exam and Severide is thinking marriage, “there are going to be some major events happening in their lives [that are] not all sunshine and roses,” showrunner Derek Haas says. But rather than issues between the couple, it will be “external circumstances” that challenge the pair.

Could you ask Chicago Fire‘s Derek Haas if we have seen the last of Jon Ecker as Greg Grainger this season? –Christie
The May 5 episode was, indeed, Ecker’s last appearance — for now, at least. “I really like him,” showrunner Haas told TVLine. “I would definitely want to see him again next season.”

I’d love any updates you have on NBC’s Debris! –Shekirah
Jonathan Tucker shared with Inside Line that the latest episode coupled with the one airing May 17 “tee up a mind-blowing finale, and people will be satisfied with the questions that get answered” along the way. Or, as co-star Riann Steele put it: “Oh, my God, the finale is just the best. Like, questions are answered, but then a whole other thing unfolds that is going to set us up for an amazing Season 2. I know that when I read it, I was like WTF!”

If you want the Inside Line on a favorite show, email [email protected]! Questions left in Comments will not be read and may count against your final score. (With additional reporting by Vlada Gelman)