“We’re smart, we found our way out of Ikea. We’ll find our way out of here.” Apple has released an official trailer for Schmigadoon!, a wacky fun musical comedy series debuting this July on the streaming service. In this parody of 1940s musicals, backpacking couple Melissa and Josh get trapped in “Schmigadoon”, a magical town filled with singing and dancing townspeople, and learn they can’t leave without finding true love—which they thought they already had. This is a clever concept, and it’s going to be so amusing to see them play with this as a series! All of the episodes are directed by Barry Sonnenfeld, only adding to the potential for this to be incredible. Schmigadoon! stars Cecily Strong and Keegan-Michael Key as the couple Melissa & Josh, who come across the wonderfully talented Fred Armisen, Dove Cameron, Jaime Camil, Kristin Chenoweth, Alan Cumming, Ariana DeBose, Ann Harada, Jane Krakowski, and Aaron Tveit. As goofy as this whole setup is, this actually looks like amusing and east to enjoy musical fun. 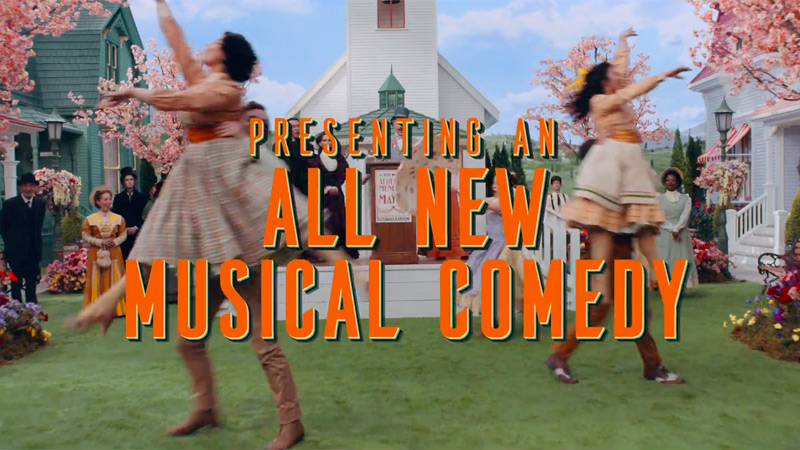 A parody of iconic musicals, “Schmigadoon!” is a new musical comedy series executive produced by Lorne Michaels and starring Emmy Award nominee Cecily Strong and Emmy Award winner Keegan-Michael Key as a couple on a backpacking trip designed to reinvigorate their relationship when they discover a magical town in which everyone is living in a studio musical from the 1940s. They then discover that they can’t leave until they find “true love.” Schmigadoon! is created by writers Cinco Paul & Ken Daurio, both of whom (writers on Despicable Me, Hop, The Lorax, Despicable Me 2, The Secret Life of Pets) also wrote the script for this. All six of the episodes are directed by filmmaker Barry Sonnenfeld, director of the films The Addams Family, For Love or Money, Addams Family Values, Get Shorty, Men in Black, Wild Wild West, Big Trouble, Men in Black II, RV, Men in Black 3, and Nine Lives previously. It’s produced by Cecily Strong, Caroline Maroney, Micah Frank, and Rose Lam. Apple TV will be debuting Paul & Daurio’s “Schmigadoon!” series streaming on Apple TV+ starting July 16th, 2021 this summer. Anyone interested?